Evernote Recurring Reminders: How To Create Them 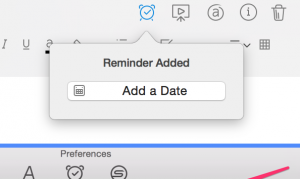 Evernote recurring reminders are on the way, according to this interview with Evernote CEO, Chris Philbin.

In the meantime, here’s how you can set up recurring reminders in the next few minutes. It’s a solution that continues to work very well for me. The usual disclaimer that your mileage may vary applies, of course.

Important Update
Evernote is just one of the tools that I use to run my business every day. I now have a (free) preferred tool for recurring reminders.

For more details on that, check out this new post.

FIRST: You’ve got to have a system for using Evernote that borrows from something like David Allen’s GTD. (Although you might know I’m not a huge fan of the bells and whistles and prefer a more simplistic approach.) Simply put, the system you’ll need to have in place is one that uses a single Evernote notebook as your default dumping ground. Let’s call it @INBOX (the @ symbol means it will stick to the top of your favorites list in your Evernote sidebar.)

Nothing should ever remain in your @INBOX once you’ve reviewed it. Where you put it is up to you, but don’t leave it in your default notebook. That’s for processing only.

You can set this up under General Preferences:

SECOND: You need to regularly review your @INBOX – once a day or once every two days is good – and assign due dates to notes that need acting upon.

Dumping everything into your @INBOX and adding reminder dates later frees you up from having to assign a date when you’re creating notes on the fly, from your phone, for example.

FOURTH: Use this recipe that I’ve created for you to create a new note at a particular day and time:

Customize it as you see fit (day of the week, time, content of the note)

LAST STEP: When you’re doing your daily review of your Evernote @INBOX, you can assign a date (and thus create a reminder) to this note, and move it out of your @INBOX. Delete it or mark it as done when you’ve finished.

(There are other ways of doing this, including sending your Evernote account an email on a repeating basis, using any of the tools that take care of that kind of thing. But this one works for me.)

If you’re not yet an Evernote user, or you ARE an Evernote user but you’ve never really got to grips with it, I recommend Evernote Essentials by Brett Kelly as an excellent starting point.